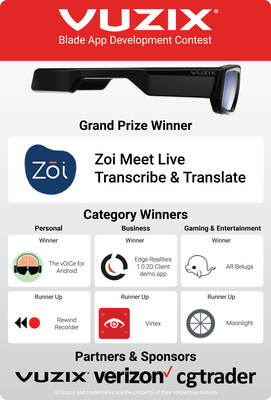 The Vuzix Blade app development contest attracted more than 200 registered participants who signed up to develop Vuzix Blade applications related to the personal, business and gaming and entertainment categories. Teams from more than 10 countries submitted apps.

The business category represents apps meant to streamline processes and/or contribute to workplace productivity, including making it easier for workers to do their jobs or complete work-related specific tasks.

The gaming and entertainment category represents for apps that create a fun, interesting and/or engaging gaming or entertainment experience.

Zoi Meet, based in the Netherlands, was awarded the grand prize for its Zoi Meet application that provides live subtitles and translations on the Vuzix Blade.  The judging committee was impressed by the well-designed user interface and accuracy of the live language transcription and translation results.  Zoi Meet is currently working with several wireless carriers across the globe, including Verizon, to optimize and showcase the performance of language translation on the edge for enterprise customers with the Vuzix Blade Smart Glasses.

vOICe for Android, based in the Netherlands, was awarded first place in the personal category for their Augmented Reality application for the Blind that allows individuals to see with their ears.  The vOICe for Android maps live camera views to soundscapes, offering augmented reality and unprecedented visual detail for the totally blind through sensory substitution and computer vision.

Rewind Recorder, based in Germany, was awarded second place in the personal category for their application that allows individuals to watch what you watch and always stay ready to capture the great moment that has just passed.  By using Rewind Recorder, Vuzix Blade users can wait until something worthwhile occurs in the real world and then decide if they want a video recording of it using the Vuzix Blade camera.

Edge Realities, developed by Poland-based 1000 Realities, was awarded first place in the business category. A cloud-based AR as a Service SLAM platform designed for 5G/Mobile Edge Computing server infrastructure to take advantage of light weight smart glasses like the Vuzix Blade, Edge Realities makes it easy for content providers to deploy their own AR experiences and tools.   1000 Realities is currently working with several wireless carriers across the globe, including Verizon, to optimize and showcase the performance of their application for enterprise customers on the edge with the Vuzix Blade Smart Glasses

Virtex, developed by India-based Sparkling Apps, was awarded second place in the business category. Virtes (Vuzix Image Recognition to Text) enables Blade users to read images, recognize the text found in those images and translate that text into almost any language with just a single tap. In addition to translation of text, Virtex will also speak out the text translation to the Blade.  Virtex uses highly advanced optical character recognition to recognize text of different alphabets and characters around the world including Latin, Chinese, Japanese, Korean and others.

AR Beluga, developed by a team based in South Korea, was awarded first place in the gaming and entertainment category. The AR Beluga application provides a private interactive swimming beluga whale that Blade users can feed, interact and play catch with.

Moonlight, developed by an individual based in Canada, was awarded second place in the gaming and entertainment category.  Moonlight takes advantage of a full desktop version of a NVIDIA GameStream-compatible PC on a local network or the Internet by turning a user's Vuzix Blade into a remote gaming heads-up-display that can be paired to an Android gaming controller.

"The first Vuzix Blade app development contest was truly a global effort and it was great to see developers from around the world submit applications for the Blade," said Paul Travers, CEO and president, Vuzix. "The level of creativity and ability of our developers to leverage the many unique attributes of the Blade was very impressive.  Although the voting committee could only officially select several winners, we would like to thank our developer community for showing strong interest in Vuzix smart glasses and submitting their applications into our contest."

Vuzix is a leading supplier of Smart-Glasses and Augmented Reality (AR) technologies and products for the consumer and enterprise markets. The Company's products include personal display and wearable computing devices that offer users a portable high-quality viewing experience, provide solutions for mobility, wearable displays and augmented reality. Vuzix holds 150 patents and patents pending and numerous IP licenses in the Video Eyewear field. The Company has won Consumer Electronics Show (or CES) awards for innovation for the years 2005 to 2020 and several wireless technology innovation awards among others. Founded in 1997, Vuzix is a public company (NASDAQ: VUZI) with offices in Rochester, NY, Oxford, UK, and Tokyo, Japan.  For more information, visit Vuzix website,  Twitter and Facebook pages.

Certain statements contained in this news release are "forward-looking statements" within the meaning of the Securities Litigation Reform Act of 1995 and applicable Canadian securities laws. Forward looking statements contained in this release relate to the Vuzix Blade Smart Glasses, our relationship Blade app development contest winners and among other things the Company's leadership in the Smart Glasses and AR display industry. They are generally identified by words such as "believes," "may," "expects," "anticipates," "should" and similar expressions. Readers should not place undue reliance on such forward-looking statements, which are based upon the Company's beliefs and assumptions as of the date of this release. The Company's actual results could differ materially due to risk factors and other items described in more detail in the "Risk Factors" section of the Company's Annual Reports and MD&A filed with the United States Securities and Exchange Commission and applicable Canadian securities regulators (copies of which may be obtained at www.sedar.com or www.sec.gov). Subsequent events and developments may cause these forward-looking statements to change. The Company specifically disclaims any obligation or intention to update or revise these forward-looking statements as a result of changed events or circumstances that occur after the date of this release, except as required by applicable law.