ROCHESTER, N.Y., June 25, 2019 /PRNewswire/ -- Vuzix® Corporation (NASDAQ: VUZI), ("Vuzix" or, the "Company"), a leading supplier of Smart Glasses and Augmented Reality (AR) technology and products announces the availability of the DJI Drone app on the Vuzix Blade Smart Glasses enabling enterprise, first responders, security officials and consumers to fly DJI drones without the aid of a spotter, smartphone or tablet. 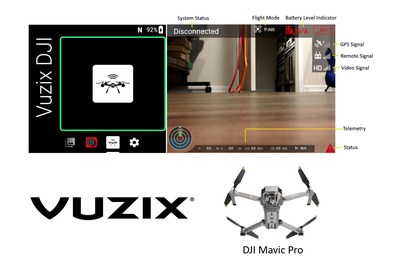 The solution was developed by Vuzix specifically for the Vuzix Blade Smart Glasses and the DJI Drone app is compatible with any DJI drone, including Mavic Pro, Mavic Air and Spark.  Latest figures compiled by Skylogic Research estimate that DJI has a 74% share of the overall drone market and a 86% share of Drones priced between $1,000-$1,999.

The DJI Drone app on the Blade enables the communication between the glasses and any DJI remote controller through a USB cable or via WIFI.  The Vuzix Blade now enables the pilot to not only keep their eyes on the drone but simultaneously receive navigational feedback and a live video feed directly through the Vuzix Blade Smart Glasses.

The DJI Drone app was developed in close conjunction with a test panel of DJI Drone enthusiasts and the user experience feedback is very encouraging.    "I am able to navigate the drone in a much more intuitive manner, and position the drone for better video capture", noted one panelist while inspecting a commercial rooftop with their Drone using the Vuzix Blade Smart Glasses.  "Not having to look down at my controller all the time makes flying the drone much more enjoyable and easier", noted another panelist while taking their drone out for a joy ride.

"Drones are being used across multiple vertical markets including security, first responders, insurance, inspection, manufacturing, field service and by consumers.  DJI controls a significant share of the drone market and the integration of the DJI Drone app for the Blade opens up additional adjacent markets for the Blade to be used as a hands-free visual aid eliminating the need for a smartphone or tablet, " said Paul Travers, President and Chief Executive Officer at Vuzix.

The DJI drone app on Vuzix Blade Smart Glasses is now available for download on the Vuzix app store.

Vuzix is a leading supplier of Smart-Glasses and Augmented Reality (AR) technologies and products for the consumer and enterprise markets. The Company's products include personal display and wearable computing devices that offer users a portable high-quality viewing experience, provide solutions for mobility, wearable displays and augmented reality. Vuzix holds 153 patents and patents pending and numerous IP licenses in the Video Eyewear field. The Company has won Consumer Electronics Show (or CES) awards for innovation for the years 2005 to 2019 and several wireless technology innovation awards among others. Founded in 1997, Vuzix is a public company (NASDAQ: VUZI) with offices in Rochester, NY, Oxford, UK, and Tokyo, Japan.  For more information, visit Vuzix website,  Twitter and Facebook pages.

Certain statements contained in this news release are "forward-looking statements" within the meaning of the Securities Litigation Reform Act of 1995 and applicable Canadian securities laws. Forward looking statements contained in this release relate to our business relationship with DJI, future business and among other things the Company's leadership in the Smart Glasses and AR display industry. They are generally identified by words such as "believes," "may," "expects," "anticipates," "should" and similar expressions. Readers should not place undue reliance on such forward-looking statements, which are based upon the Company's beliefs and assumptions as of the date of this release. The Company's actual results could differ materially due to risk factors and other items described in more detail in the "Risk Factors" section of the Company's Annual Reports and MD&A filed with the United States Securities and Exchange Commission and applicable Canadian securities regulators (copies of which may be obtained at www.sedar.com or www.sec.gov). Subsequent events and developments may cause these forward-looking statements to change. The Company specifically disclaims any obligation or intention to update or revise these forward-looking statements as a result of changed events or circumstances that occur after the date of this release, except as required by applicable law.