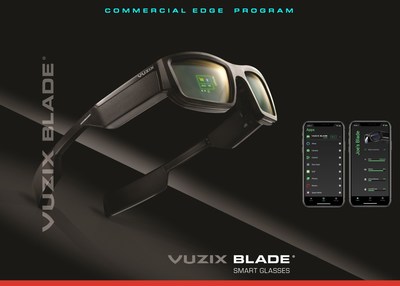 The Vuzix Blade Commercial Edge Software Suite is available for download via Over the Air (OTA) system updates.  Vuzix Blade owners simply need to connect to Wi-Fi and the Vuzix Blade will automatically prompt when there is a software update available.  Vuzix Blade owners can also access the enhanced settings menu from their Blade to manually check and update the Blade software.  An updated user guide and quick start guide are also available and can be accessed from the Vuzix website (https://www.vuzix.com/support/blade-smart-glasses).

Vuzix Blade owners are also encouraged to download and install the Vuzix Blade Companion App directly from the App Store or Google Play onto their phones.  Once installed, tap Start Setup and follow the instructions on the screen to connect your iOS or Android smart phone with your Blade.  The Companion App enables easy setup and customization of your Blade and manages the communication link between the Blade and your smart phone.  The Companion App on the smart phone allows users to manage practically all application notifications and alerts from the phone to the Blade including email, messages and navigation, media player control and more.

The Blade Commercial Edge Software Suite release includes a series of new features and upgrades from the earlier Developer Edition including:

"The combination of the Blade Commercial Edge Software Suite and the Vuzix Blade Companion App opens up the communication links directly between connected Android and iOS devices.   The Vuzix Blade not only delivers new hands-free solutions, but content and productivity tools for consumer facing business applications.  It also marks the beginning of leaving your phone in your pocket," said Paul Travers, Vuzix President and Chief Executive Officer.

Vuzix is a leading supplier of Smart-Glasses and Augmented Reality (AR) technologies and products for the consumer and enterprise markets. The Company's products include personal display and wearable computing devices that offer users a portable high-quality viewing experience, provide solutions for mobility, wearable displays and augmented reality. Vuzix holds 62 patents and 71 additional patents pending and numerous IP licenses in the Video Eyewear field. The Company has won Consumer Electronics Show (or CES) awards for innovation for the years 2005 to 2018 and several wireless technology innovation awards among others. Founded in 1997, Vuzix is a public company (NASDAQ: VUZI) with offices in Rochester, NY, Oxford, UK, Barcelona, Spain and Tokyo, Japan.

Certain statements contained in this news release are "forward-looking statements" within the meaning of the Securities Litigation Reform Act of 1995 and applicable Canadian securities laws. Forward looking statements contained in this release relate to Blade Smart Glasses, new Blade Commercial Software Suite and Companion App, their features and performance and among other things the Company's leadership in the Smart Glasses and AR display industry. They are generally identified by words such as "believes," "may," "expects," "anticipates," "should" and similar expressions. Readers should not place undue reliance on such forward-looking statements, which are based upon the Company's beliefs and assumptions as of the date of this release. The Company's actual results could differ materially due to risk factors and other items described in more detail in the "Risk Factors" section of the Company's Annual Reports and MD&A filed with the United States Securities and Exchange Commission and applicable Canadian securities regulators (copies of which may be obtained at www.sedar.com or www.sec.gov). Subsequent events and developments may cause these forward-looking statements to change. The Company specifically disclaims any obligation or intention to update or revise these forward-looking statements as a result of changed events or circumstances that occur after the date of this release, except as required by applicable law.